(opens in a new tab)

Bear Safety Tips to Keep You and the Bears Safe

If you go out into the woods today, you’re in for a big surprise. Or at least, that’s how the nursery rhyme goes. And while you may not run into a teddy-bear picnic while strolling the Valley Trail, you just might encounter one of Whistler’s 50+ resident Black Bears. There is no better time to see bears than Spring – after waking up from a winter of beauty sleep, the bears come to the valley in search of food. This time of year, you can see bears just about everywhere in Whistler. They love strolling along the Valley Trail network, tromping through hiking trails, cruising past parks, or hanging out at golf courses. Bears are a huge part of Whistler and can be considered ‘locals’ just like the rest of us. Because of this, it is important to learn how to keep yourself safe around bears, and how to keep bears safe from human interaction. In today’s blog post, we will cover how to identify Black Bears versus their larger cousins the Grizzly Bear, how to keep safe during encounters, and how to avoid them in the first place.

CAN YOU SPOT THE DIFFERENCE?

Though Black Bears and Grizzly Bears may appear similar at first glance, they have more differences than they do similarities. Black Bears make up most of the population in Whistler and are the common bear sighting, whereas Grizzly Bears are more secluded animals.

Black Bears are large, ranging between 41-79kg for adult females, and 59-300kg for adult males. The bears in Whistler often seem dozy and sleepy but they are incredibly quick, with the ability to reach speeds between 40-48 kilometres per hour. They are often what you first imagine when you think of ‘bear’ – likely because there is up to 160, 000 of them in British Columbia, totalling to a quarter of the Black Bear population in Canada.

Grizzly Bears are far larger than Black Bears. They can range between 130-270kg and are as tall as one metre at the shoulder. Though Grizzly bears do live in Whistler, it is extremely rare to see one. Grizzly bears prefer the secluded mountainous and alpine territory. Since Grizzly Bears require vast space, the estimated number of resident Grizzly Bears is just three! They reside in the solutide of Callaghan Valley, though they have been known to venture closer to town on rare occassions.

The best way to deal with a bear encounter is to avoid one altogether. It is important to take precautionary measures when travelling in bear country to keep yourself and the local bears safe.

The easiest way to avoid a bear encounter is to announce your arrival. If you are in a group, chat with each other! The sound of your conversation will be heard by a lurking bear and encourage them to move on. Black Bears do not want conflict and are happy to travel to another spot if they know that people are coming their way. If you are alone (especially when on hiking trails), try using a bear bell or play music from a speaker.

Going hand in hand with the above, try to travel in groups as much as possible, especially when in the back country.

Dogs can provoke aggressive behaviours in bears. Always keep them close and on a leash to avoid provoking the animal.

Bears have an incredible sense of smell. They can smell food from far away and will investigate. It is important to pack out any garbage you bring in, including food scraps. Do not store food, BBQ equipment, or anything with food residue outside or on decks. Bears are natural climbers and can easily access a second or third floor balcony. Garbage should be properly stored at all times in bear-proof containers. Remember, a fed bear is a dead bear.

When walking along trails, remove your ear buds. Keep a watchful eye for bear signs such as scat, tree marks, and tracks. Be mindful if you are near a potential food source including berry patches, grassy meadows, and salmon runs. Be extra cautious when travelling around a blind corner, where you can potentially startle a hidden bear.

WHAT TO DO IF YOU ENCOUNTER A BLACK BEAR

Black bears are shy and timid creatures. They would sooner run away from a conflict than engage in one. They are intelligent and creative animals well-adapted to sharing space with humans. However, due to the overlap between the two species, it is very possible that you will come across a Black Bear during your travels. If you see a bear from a distance, consider finding an alternative route to avoid encroaching on the bear’s space. If you must go forward, take a detour to give the bear a wide berth. Don’t give them a reason to find interest in you. Alert the bear to your presence by making loud noises and stick close together if travelling in a group.

Sometimes, despite our best efforts, close bear encounters are unavoidable. If this happens, assess whether you can move out of the area. Speak in a calm but assertive tone, back away slowly while keeping an eye on the bear. It is important not to run as running could trigger a chase. If a bear is in an area it should not be in, such as a campsite or residential area, it is possible to drive a bear away. In encounters like these, bears often flee, not wanting to be a part of any conflict. To encourage this, make sure that the bear has an escape route with no people or obstacles in its way. Make yourself as large as possible while creating noise or speaking to the bear. Tell it what you want it to do. For example, "Get out of here, bear!". Creating a negative experience for the bear in an area associated with humans will discourage further behaviour. When encountering a Black Bear, make sure you are not standing between it and its food source or cubs – this can trigger defensive behaviour. 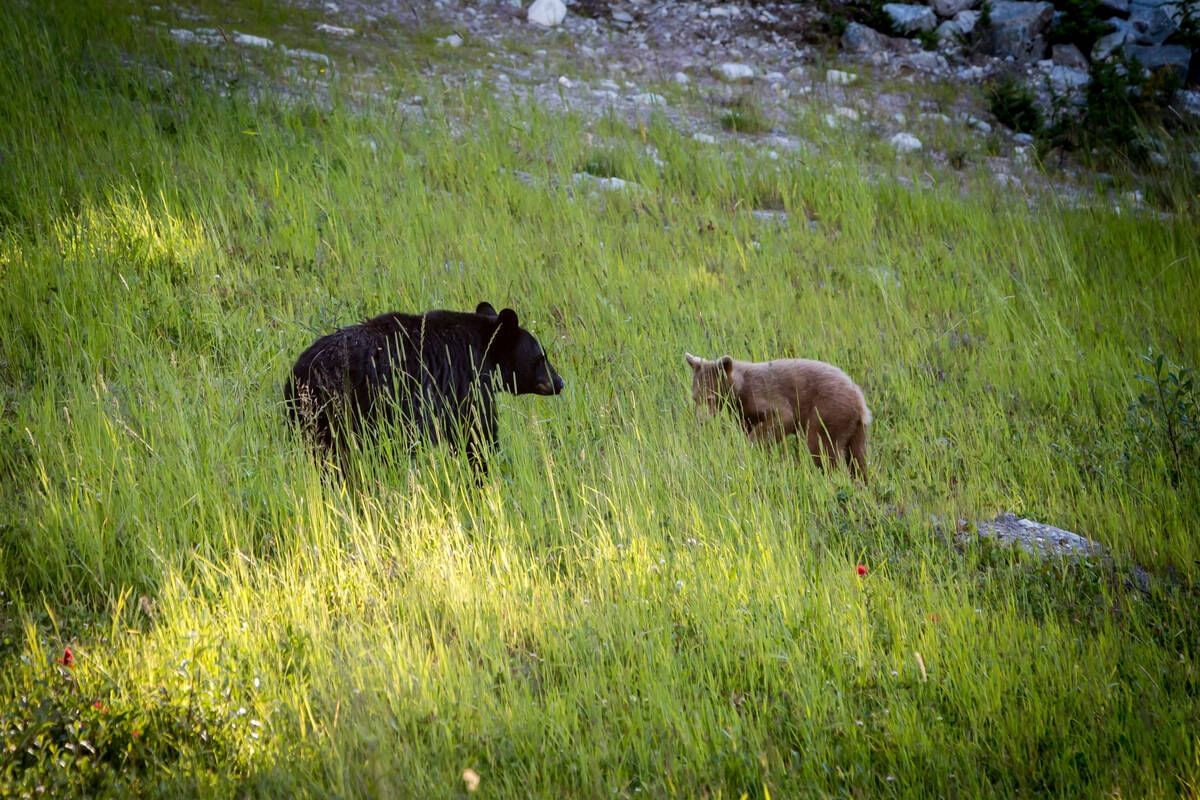 If a bear does feel threatened, it may act aggressively to defend itself against a threat. This behaviour can be seen in bears defending food sources and cubs, or bears that were taken by surprise.  Defensive behaviours including popping jaws, swiping at the ground with front paws, snorting or blowing, and bluff charges. Black Bears are not naturally drawn to conflict; they would much prefer to run. If you encounter a black bear at close range, speak calmly and back away slowly. Increase the distance between you and the bear. Prepare your bear spray in case the bear intends to make physical contact. Once at a safe enough distance, leave the area immediately.

WHAT TO DO IF YOU ENCOUNTER A GRIZZLY BEAR

Unlike Black Bears, Grizzly Bears are less accustomed to humans. They spend most of their time in mountainous areas that are uninhabited by people. If you come across a Grizzly Bear while in the backcountry, stop immediately and back away slowly while speaking in a calm voice. Do not try to frighten off a Grizzly Bear as you would with a Black Bear. They are far more aggressive and are more likely to engage and defend than they are to run away. Make sure to carry bear spray, a powerful bear deterrent.

As we have learned, bears are Whistler locals. They are around in great number right across town. They are amazing creatures apart of a very diverse and beautiful ecosystem. There are plenty of ways to safely view bears while in Whistler.

Bears are welcomed members of Whistler society, but it is important to treat them with the respect all wild animals deserve. Keep in mind the bear safety basics when walking along the Valley Trail network or are hiking in the beautiful backcountry. Remember to make noise and keeps dog on a leash, as well as be mindful of any food or garbage that you may have. If you do come across a bear, speak in a calm voice and back away, finding an alternate route or going back the way you came.

Whistler is a place where bears and humans have peacefully co-existed in the past. By taking all the necessary precautions and actions, it is possible for this tradition to continue. On behalf of the Whistler residents (the bears), thank you for learning about and practicing bear safety! 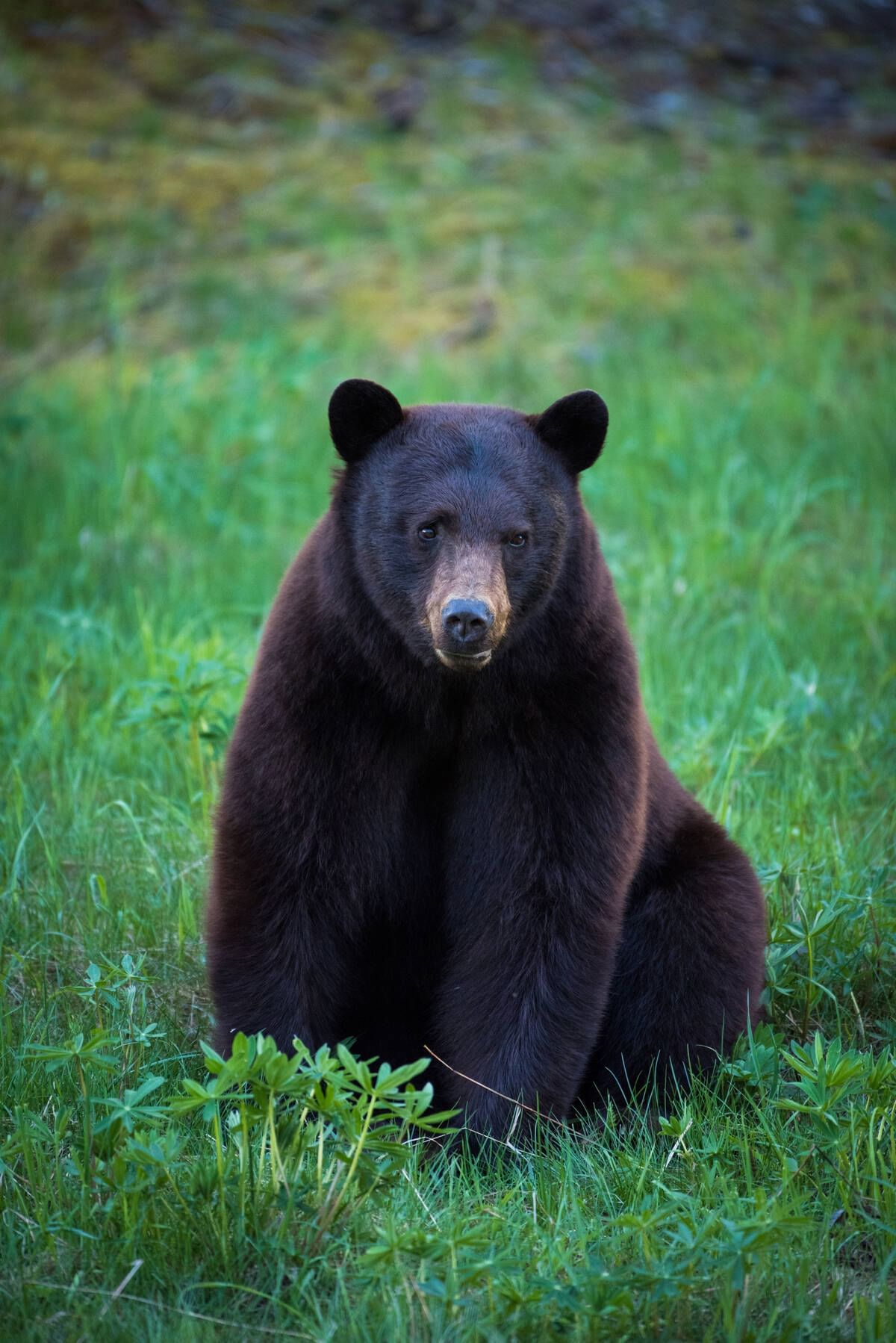